I am a Pacific Northwest girl. I know rain, I know clouds, and I know mild weather.

Winter to me isn’t snow and ice, though trust me I did see them occasionally. But that snow would quickly melt with the warming temperatures and the ground would be visible from under the white. I grew up never experiencing temperatures much lower than freezing and I was very okay with that. I didn’t mind the rain, and I certainly knew that I didn’t like being cold very much.

When I found out that I would be moving to Ontario for two years I told everyone I knew that I wouldn’t survive the winter. Everyone laughed at this, but there was a part of me that wasn’t joking. Though I had seen snow and been through many winter seasons I know that what I had experienced was nothing compared to what Canada is known for.

So here I was just over a year ago; I had purchased a big winter coat and boots that were better for snow than rain. I had toques and scarves a plenty and even some wool socks and new gloves. I was physically prepared, but I don’t think I was mentally prepared.

There is something unsettling about snow that lasts for weeks on end, for not being able to remember what grass looks like, or what the thermometer looks like when it above zero, but I have to admit it is not as bad as I thought it would be. 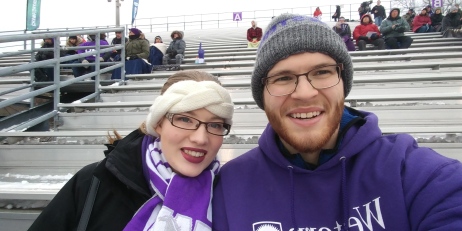 Now as I am working through my second Ontario winter I have to admit I have developed a fondness for this cold, dry, winter wonderland. I no longer am scared of the negative temperatures (until it gets past about -20 and then I start to dislike it) and the snow is so dry and pretty as it falls (and it doesn’t get gross as fast). I like bundling up in the house with a hot cup of tea and lots of blankets and watching the world get turn white outside, and I like taking walks through the neighbourhood and trails when everything is covered in snow.

Going back to Vancouver for Christmas this year was shocking. I forgot how much it rained and honestly didn’t like it as much as I used to. I loved when it did snow as it reminded me of here, though the snow wasn’t as nice and turned grey almost immediately. The humidity in the air made the mild temperatures feel much colder than the negative temperatures back home and it didn’t feel as much like winter.

So call it what you want, I love winter. Does this make me more Canadian? Now don’t get me wrong I still can’t be outside for that long without feeling like I am frozen to death and breaking a path through a foot of snow is not an easy feat, but my opinions have definitely changed.

As winter winds down and we enter another spring (which has many benefits itself) I will enjoy the snowy days, the cold temperatures, and the memories that come alongside of it.