I, like many other people, am on my phone a lot. Probably too much if I am being honest, but it has become such a major part of my life. While I try to not be on it right before bed I sometimes find myself lying awake and so I just grab my phone, or I need it for something actually important but then I find myself scrolling through Instagram again even though I have seen it all.

When we traveled down to Oregon a few weeks ago (check out more about that trip here) I was forced to take a bit of a digital detox as I could only use my phone when we at places that had free Wifi. Nigel and I took this a little further though on our last night when we stayed in this cute AirBnb, the Fruithouse. 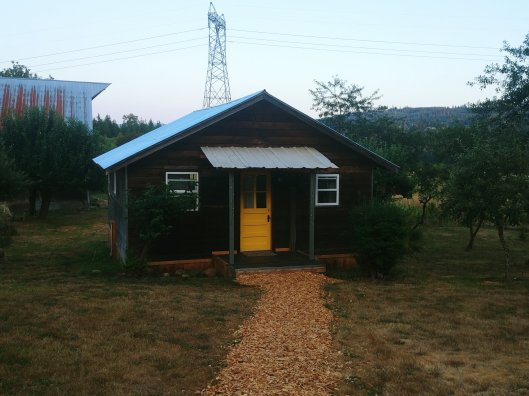 From the description of the place we knew that there was both no Wifi and also not great signal at this location, but that didn’t both us at all. Instead we decided to take advantage of it and really turn off everything. From the moment that we got in (and took a few photos of the place since it was so cute) we both plugged our phones in and turned them completely off, not to be touched until we left the next morning.

I feel like we really connected again over the next few hours. We really got to spend time together, not worrying about what was going on on our phones or in the outside world and just taking time for the two of us. Considering that our 2 year anniversary is coming up in a few weeks and this trip was sort of a celebration of that it was a great time to chat about the past few years, everything we have done and seen, and what we envision going forward in our marriage.

I feel like I also fell asleep so much quicker, not having the option of picking up my phone to play a game or do something random instead of focusing on falling asleep and getting to wake up without an alarm or even a phone nearby, hearing the rooster crow outside of the window and not even caring what time it was was such a refreshing way to wake up.

Now this doesn’t mean that I never turned on my phone again and I never look at it, but this experience has made me more aware of its presence. I am trying to be more mindful of the time I spend staring at it, doing what I need to do and then putting it away, or blocking out specific times where I can play games or scroll through my social media feeds. I also am trying not to be on it right before bed, choosing to turn on a light and read if I am lying in bed really awake instead of staring at that dreaded blue light.

Spending 15 hours without my phone was not a revolutionary thing, nor was it super hard to do, but it has started to change my relationship with it, and also with the people around me.

New blog post!
🌷
New blog post! One of the things that truly determines how good our week is going to go is if we meal plan. Today on the blog I am sharing why I like to meal plan, how we do it, and some of my tips and tricks. Do you meal plan? If so, what works for you when meal planning?
New blog post! Sharing some of my latest empties, some changes to my beauty routines, and some items that I am saying goodbye to after a very long time.
Cherry blossoms and blue skies
First evening walk to the garden of the year. Feels good to spend some time alone working in the dirt and hoping for the plants to grow.